Expert Urges: Don’t Get the Shot

The flu season has gotten off to a mild start, with viruses reported in 30 states, according to the Centers for Disease Control and Prevention. Of the 24,027 specimens tested, 266 — 1.1 percent of them — were positive for flu virus and about half of those came from the southeastern part of the country.
What’s more, a new flu strain known as novel influenza A (H3N2), which combines a rare flu virus from North American pigs with the H1N1 virus from the 2009 global swine flu outbreak, has stricken 10 people since the summer, federal officials report. All patients have recovered from the illness. Some had been exposed to pigs, while others contracted the virus from those who were infected, the CDC reports.
Such human-to-human transmission of the flu virus is a good reminder that regular hand washing is one of the best ways of preventing the flu, says Newsmax Health contributor David Brownstein, M.D., a board-certified family physician and holistic health practitioner. This basic health practice — one of several he recommends — is a better flu-fighting strategy than getting a flu vaccine, he says.
“I do not recommend people get the flu shot,” he says. “It has never been conclusively shown to protect people from the flu and has not been shown to prevent it in the elderly.”
Brownstein, author of the newsletter “Natural Way to Health,” points to studies that have found the vaccine is not effective in preventing flu complications among the elderly and exacerbations of asthma among small children. The CDC encourages the young and old alike to get a flu vaccine as a way of avoiding such complications.
“It has been shown to be ineffective,” Brownstein says.
For its part, the CDC notes on its website that the effectiveness of the vaccine is never 100 percent and can vary depending on a person’s age and health.
“In general, the flu vaccine works best among young healthy adults and older children,” the CDC says. “Some older people and people with certain chronic illnesses might develop less immunity than healthy young adults after vaccination.”
Whether the vaccine matches the circulating viruses also plays a role. Because the vaccine must be developed months in advance to ensure delivery by the start of the flu season in the fall, health officials make their best estimate of which three viruses will be circulating.
“While determining how well a flu vaccine works is challenging, in general, recent studies have supported the conclusion that influenza vaccination benefits public health, especially when the viruses in the vaccine and circulating viruses are well-matched,” the CDC says.
Brownstein says conclusive evidence that the vaccine is effective isn’t there. Also, the fact that many vaccines, including the flu vaccine, contain thimerosal, a preservative made with mercury, reinforces the argument against it, he says. Mercury is toxic, and no one should ingest or inject anything made with it, he says.
“It’s unconscionable to inject anybody with any mercury-laden substance, vaccines included,” Brownstein says.
Instead, when it comes to preventing the flu, “people need to do the basics,” Brownstein says. He advises that you:
Frequently wash your hands. This is especially important if you are around a person who is ill. In a public restroom, use a paper towel to turn off the faucet and open the door.
Eat a healthy diet. A good diet full of whole foods and fresh fruits and vegetables will help your immune system. Avoiding white or refined sugar, like high fructose corn syrup, is important because it can make our disease-fighting white blood cells sluggish, Brownstein says. Natural sugars, like honey and unrefined cane sugar, do not.
Drink enough water. You need to drink plenty of water for your immune system to function well. But how much water is enough? Brownstein says follow this formula: Divide your body weight (in pounds) by two. The resulting number is the amount of water — in ounces—that you should consume daily.
Make sure you get adequate vitamin D. Studies show that people with higher vitamin D levels usually have viral illnesses that run a shorter course and involve fewer complications, he says. He suggests taking 6,000 to 10,000 units of vitamin D3 daily.
Supplement with vitamin C. Vitamin C deficiency can hurt your immune system. Brownstein recommends supplementing with between 1,000 and 6,000 mg a day. But beware: Overdoing it can cause diarrhea.
Posted by Ray Publishing Interactive Media at 5:27 PM No comments:

Once You Go Conservative Black, You Better Watch Your Back!

The left is trying to destroy Cain with a miasma of hazy accusations leveled by three troubled women. Considered individually, the accusations are utterly unbelievable. They are even less credible taken together. This is how liberals destroy a man, out of nothing.

Check out My Daughters and Grandsons Rockin' Out For Christmas @ Ray Publishing | Home
Posted by Ray Publishing Interactive Media at 6:31 PM No comments:

Everyday can be Thanksgiving

Thanksgiving is one of my favorite holidays, and I just love that it's a celebration of all wonderful things - family, friends, health, happiness and food! I have so many things to appreciate in my life, but besides the obvious, my life has truly been enriched through writing about my faith, friends and family.

I'm thankful for my new grandsons and pray the Lord continue to bless us with all his many blessing! 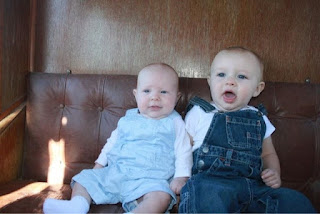 At this special time of year, I want you to know that I give thanks for you, your prayers.

1 Chronicles 29:11-13
"Yours, O LORD, is the greatness and the power and the glory and the majesty and the splendor, for everything in heaven and earth is yours.
Yours, O LORD, is the kingdom;
you are exalted as head over all.
Wealth and honor come from you;
you are the ruler of all things.
In your hands are strength and power
to exalt and give strength to all.

Now, our God, we give you thanks,
and praise your glorious name." (KJV)

Posted by Ray Publishing Interactive Media at 4:09 PM No comments:

Motorcyclist Airlifted to Hospital After Collision with Goat

Motorcyclist Airlifted to Hospital After Collision with Goat
Posted by Ray Publishing Interactive Media at 3:55 PM No comments:

Posted by Ray Publishing Interactive Media at 5:55 PM No comments:

Posted by Ray Publishing Interactive Media at 6:36 PM No comments: