What Makes a Bad Boss Bad?

I'm know expert or judge on what is a Bad Boss and my comments do not reflect on me personally or my boss.  I have many friends that say they have Bad Bosses.  And at sometime in your life if not now but in the past or future will have one.  How should I say it?  How does the saying go? "One bad apple spoils the whole barrel." This is never more appropriate than when speaking of a bad boss.  Almost every Christian worker has had a negative experience or two working for a bad boss.  But, just in case you've managed to escape one, here are some tell-tale signs. 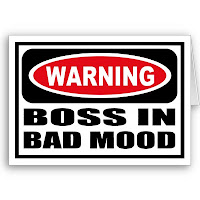 No one likes to be around or near a boss who explodes in a fit of rage each time something goes wrong or a mistake is made. This kind of bad boss is insensitive to workers and berates them in front of others to make himself/herself look good.

Is unjust and plays favorites (Proverbs 4:5)

The negative effects of boss favoritism can happen to anyone in the organization. It creates unfair and uncomfortable situations and can really hurt people in the end-even the workers who are considered the "pets" or favorites.  I call these workers but kissers and feel like this is one of the fastest ways for a boss to divide his/her followers and lose their confidence is to play favorites and show partiality.

A bad boss stays involved in a worker's job responsibilities to the point of getting in the way. He or she may also have expectations that range from unreasonable to impossible. This kind of boss typically looks for someone to blame, a scapegoat, instead of concentrating on fixing the problem.

Unfortunately some bosses do not know how to be bosses. How many of you have experienced this? They may be skilled in the actual performance of the task, but do not know how to work with and manage other people. In today's business world a boss must be able to do both.

Says one thing, then does another (Proverbs 29:22)

Bad bosses produce low morale, poor worker performance, and a bad work environment-especially when they are double-minded (say one thing, then do another). Because of low self-esteem they encourage workers to report all the office gossip and snoop out damaging information about co-workers and other bosses.

Bad bosses can be selfish, self-obsessed, inadequate, insecure and totally insensitive, treating their workers as if they were inhuman. They exaggerate their own contributions and are reluctant to acknowledge the contributions of others. These bosses expect their own needs to be met at all costs and constantly demand respect and consideration while persistently denying similar treatment to workers.

Does not appropriately confront a worker's poor performance (Proverbs 20:26)

Bad bosses allow workers to neglect their duties, and look the other way when workers perform inadequately instead of confronting the problem and resolving the issue by helping the worker to change his/ her behavior.

Thank You for the love You have shown me.  Lord I pray for my Boss and my Friends Bosses that they come to you and that if they are not saved that they be saved.  Help me to love others in the same way You have loved me.  Use me today to share the love of God with someone I see. In Jesus’ name, Amen.
Posted by Ray Publishing Interactive Media at 11:34 AM No comments: