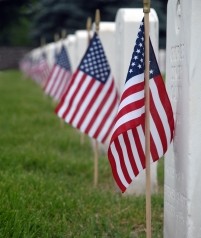 Memorial Day 2011 is a United States federal holiday observed on the last Monday of May (May 30 in 2011). Formerly known as Decoration Day, it commemorates U.S. soldiers who died while in the military service. First enacted to honor Union soldiers of the American Civil War. It was extended after World War I to honor Americans who have died in all wars.
Memorial Day often marks the start of the summer vacation season, and Labor Day its end. 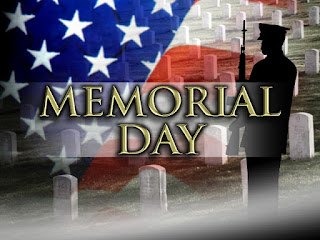 Begun as a ritual of remembrance and reconciliation after the Civil War, by the early 20th century, Memorial Day was an occasion for more general expressions of memory, as ordinary people visited the graves of their deceased relatives, whether they had served in the military or not. It also became a long weekend increasingly devoted to shopping, family get-togethers, fireworks, trips to the beach, and national media events such as the Coca COLA 600 & Indianapolis 500 auto race, held since 1911 on Memorial Day.
Dear Father,
I pray for all the families in this great nation.  Thank You for loving me. Thank You for dying for me.  Lord bless the men & women currently fighting to protect our freedom, as well as the freedom of those around the world.  And comfort the families that have lost loved ones and armed forces that still are serving to protect our freedoms.
In Jesus' name. Amen
Posted by Ray Publishing Interactive Media at 12:24 PM No comments: