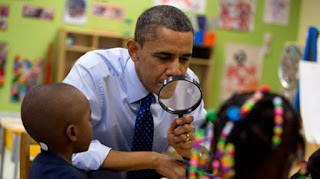 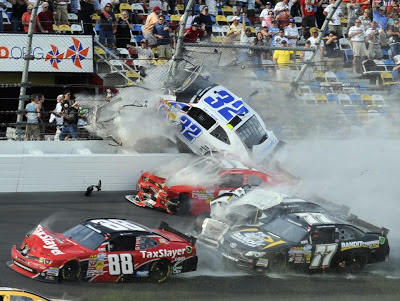 Debris flew into the stands, injuring a number of spectators -- at least two of them critically -- during a jaw-dropping crash Saturday in the final turn of a NASCAR race at Daytona International Speedway.

The multi-car crash occurred near the end of the Nationwide Series Drive4COPD 300 race at the same Florida track where Sunday's Daytona 500 will be held.

The race had recently restarted after another wreck, after which driver Michael Annett was hospitalized for bruising to his chest, according to Richard Petty Motorsports.

Several closely-packed cars were jostling for position at top speed when they got tangled up, setting off a dangerous chain reaction that ensnared a number of vehicles.

Reigning Sprint Cup champ Brad Keselowski -- who later told CNN he and others were simply "going for the win" -- was among those involved, while Tony Stewart somehow emerged unscathed and finished by winning the race.

Driver Kyle Larson's vehicle ended up flying into a fence that separates the track from spectators. It broke into pieces -- including tires and a fiery engine.

Larson walked away from the crash, even after the front part of his No. 32 car was completely gone. He and the other nine drivers involved told reporters that they were checked at a medical tent on the Daytona infield and released.

Some of the shredded debris flew into the barrier, while others got into the stands -- some of it reaching the second level about 20 feet up.

A video posted on YouTube shows a cloud of debris flying into stands and one man gasping, "Oh, my God." A tire rests on one seat, as a man frantically waves and yells to get the attention of paramedics.

Afterward, several spectators could be seen lying down after apparently suffering injuries. A line of about 10 ambulances lined up on the track, with some first responders carrying stretchers.

Fourteen fans were treated at an on-site medical facility, while 14 others were transported to area hospitals, speedway president Joie Chitwood told reporters.

"I'm just hoping everyone is OK," said Keselowski. "As drivers, we assume the risk. But fans do not."

NASCAR president Mike Helton earlier told ESPN, which was broadcasting the race, some people were taken to Halifax Health Medical Center. He said the protective fence did its job in preventing potentially more injuries and possibly deaths.

Byron Cogdell, a spokesman for the hospital, said that his facility was treating 12 patients. Two of those -- one of them a child -- are in critical but stable condition.

"Everybody appears to be in stable condition," Cogdell said.

Accidents are nothing new to NASCAR, where cars often cruise at speeds topping 190 mph, nor to the Daytona track. One of the sport's most horrific, and well-known, wrecks happened in the 2001 Daytona 500, when famed driver Dale Earnhardt Sr. was killed -- also, on that race's final lap.

Still, injuries and fatalities to spectators are much rarer.

With the stands having been quickly evacuated, crews worked to repair the damaged fence. Chitwood expressed confidence the 55th edition of the Daytona 500 would go on as planned, with spectators even sitting in the same seats struck by debris Saturday.
Posted by Ray Publishing Interactive Media at 7:06 PM No comments: 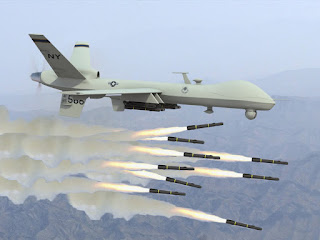 Drones to Kill Americans?… The Fast Track to Total Communist Submission
Posted by Ray Publishing Interactive Media at 11:55 AM No comments: