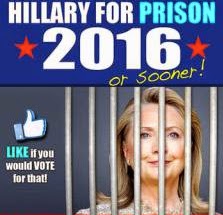 Most people, Christian's and Non-Christian alike are sick and tired of all the lies some of our government and White House are feeding us. Twitter and Facebook have been trending 10's of thousands of Hash-Tags #‎hillaryforprision2016 ‬and Hillary Clinton's email troubles are far from over! And it's not GOP theatrics as she says thats getting her in deep crap (untrust) of the American people!

News reports released today in most of the news media around the world says that under an independent audit relieved that the State Department is and was among the worst agencies in the entire Federal Government at protecting it's computer network durning Hillary Clinton's tenure as Secretary of State.

This week will not get any easier for Hillary Clinton as she gets set to testify before the house committee on Benghazi this Thursday October 22, 2015. Everyone knows that she is lying even though Politically Correct Media doesn't want you to listen to the facts!

The FBI recent revelations hint that the compromising of classified information on Ms. Clinton’s “private” email and server was more serious than originally believed. And new information shows just how slipshod Ms. Clinton's security measures were for her “private” server. While earlier reports indicated only a small percentage of the sensitive information that “spilled over” onto Ms. Clinton’s personal email was highly classified at the Top Secret level, that may be only a small portion of what was potentially compromised.

Particularly disturbing is the report that one of the “personal” emails Ms. Clinton forwarded included the name of a top CIA asset in Libya, who was identified as such. The source of this information was Tyler Drumheller, a retired senior CIA operations officer, who served as a sort of one-man private spy agency for Sid Blumenthal, the Clintons’ close family friend and factotum whose sometimes long-winded emails, particularly regarding Libya, have generated much of the controversy behind EmailGate.

To make matters worse, a recent investigation by the Associated Press demonstrates that even relatively low-skill hackers could have hacked Hillary’s unencrypted server, which was left vulnerable to exposure on the open Internet to a degree that cyber-warriors find difficult to believe. “Were they drunk?” a senior NSA official asked after reading the AP report. “Anybody could have been inside that server – anybody,”!
In benghazi for weeks after she knew the truth she said it was a disgusting video that caused those attacks! We know for a fact, based on State Department documents, that not only was Benghazi a terrorist attack, but Hillary knew it was a terrorist attack which had absolutely nothing to do with a YouTube video. Not only did she lie about Benghazi, she failed to act in response to the attack, and 4 American lives were lost in the conflict. 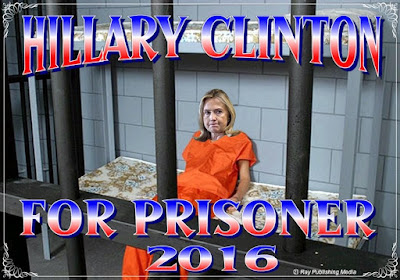 In 2012, while the FBI was investigating CIA director David Petraeus for mishandling classified information, Mr. Obama similarly dismissed the national security implications of the case at a press conference. Although FBI director James Comey pressed for serious charges against Mr. Petraeus, the White House demurred and the Department of Justice allowed him to plead guilty to a misdemeanor, sentenced to probation with no jail time. Some at the FBI were displeased by this leniency and felt


Mr. Obama showed his hand to the public early, compromising the Bureau’s investigation. Is the same happening with Ms. Clinton? It’s too soon to say, though the anger of some at the FBI has seeped into the media already. Comments to tabloids reflect the widespread frustration and fear among federal law enforcement and intelligence circles that Mr. Obama will let Ms. Clinton skate free from EmailGate.
Posted by Ray Publishing Interactive Media at 2:27 PM No comments: