A week after The Ultimate Warrior delivered an emotional speech on Monday Night Raw, the WWE honored the wrestler that died last Tuesday.
WWE superstars gathered on stage to open the show and fans were given Ultimate warrior masks to wear. After a video montage, the bell was rung 10 times in his memory.
The Ultimate Warrior, one of the biggest stars of wrestling during the 1980s and 1990s, died of heart disease, according to the Maricopa County (Ariz.) medical examiner’s office.
Warrior, 54, collapsed outside a Scottsdale, Ariz., hotel last Tuesday while walking with his wife Dana. He made his first appearance on “Monday Night Raw” in 18 years the night before his death.
Warrior, 54, died of “atherosclerotic/arteriosclerotic cardiovascular disease” and of natural causes, which means no drugs or alcohol were directly involved in his death.
Born James Hellwig, he had legally changed his name to Warrior. He is survived by his wife and two daughters.
A full autopsy report likely won’t be completed for several months.
Posted by Ray Publishing Interactive Media at 9:18 AM No comments: 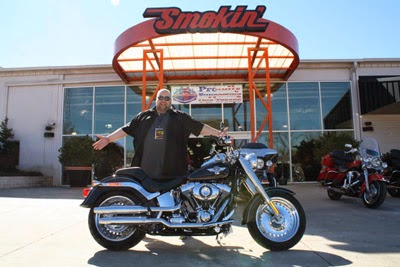 ROCK 92 AND SMOKIN' HARLEY DAVIDSON ARE GIVING YOU A CHANCE TO WIN A "FAT BOY" FROM A FAT BOY!


THERE ARE A FEW WAYS TO WIN YOUR WAY INTO THE GRAND PRIZE DRAWING:

2. REGISTER AT SMOKIN' HARLEY DAVIDSON LOCATED AT 3441 MYER LEE DRIVE IN WINSTON SALEM DURING NORMAL BUSINESS HOURS FROM MONDAY, APRIL 7TH UNTIL FRIDAY, MAY 9TH OR DURING DEMO DAYS, APRIL 12-13, 2014 AND HOGS FOR DOGS APRIL 19TH, 2014.

AND IF YOU STILL DON'T GET QUALIFIED, DON'T WORRY! THERE WILL BE LAST CHANCE QUALIFIERS DRAWN THE DAY OF THE GIVEAWAY FROM 11AM-1PM AT SMOKIN' HARLEY DAVIDSON ON SATURDAY, MAY 17, 2014.